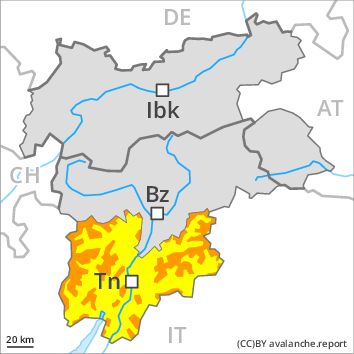 Ski touring and other off-piste activities, including snowshoe hiking, call for meticulous route selection, in particular on steep slopes above approximately 1800 m. Great caution and restraint are advisable. The more recent wind slabs are extensive and can in some cases be released easily. Single winter sport participants can release avalanches very easily, in the regions exposed to heavier precipitation in particular on wind-loaded slopes and. Below approximately 2200 m small and medium-sized gliding avalanches are possible.

The wind slabs are to be found in particular adjacent to ridgelines and in gullies and bowls and generally in the high Alpine regions. They are extensive and prone to triggering. In some cases the wind slabs have bonded still only poorly with the old snowpack. The old snowpack will be moist below approximately 2200 m. As a consequence of the strong northwesterly wind the prevalence and size of the avalanche prone locations will increase on Monday.

Gradual increase in danger of dry avalanches as a consequence of fresh snow and strong wind. The northwesterly wind will transport the fresh and old snow. Wind slabs represent the main danger. There is a danger of gliding avalanches, in particular in the regions with a lot of snow in particular below approximately 2200 m.