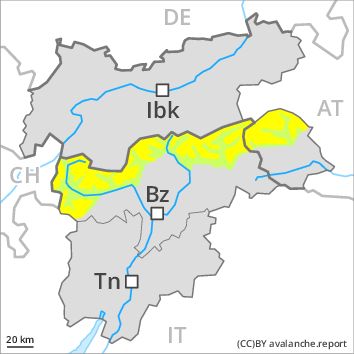 Fresh and somewhat older wind slabs can be released by a single winter sport participant in some cases in particular on northwest to north to southeast facing aspects above approximately 2200 m. In some cases avalanches are medium-sized. These avalanche prone locations are clearly recognisable to the trained eye.
Weakly bonded old snow: In isolated cases avalanches can be released in the old snowpack and reach dangerously large size. Caution is to be exercised in particular at transitions from a shallow to a deep snowpack in little used backcountry terrain.

In some regions up to 5 cm of snow, and even more in some localities, will fall. The fresh and older wind slabs are to be evaluated with care and prudence on steep shady slopes at high altitudes and in high Alpine regions. Faceted weak layers exist in the old snowpack. The snowpack will be subject to considerable local variations. In steep terrain there is a danger of falling on the hard snow surface.

The avalanche prone locations are to be found in particular on very steep northwest, north and southeast facing slopes above approximately 2200 m, especially in gullies and bowls, and behind abrupt changes in the terrain. These places are clearly recognisable to the trained eye. Mostly the avalanches are small.
In steep terrain there is a danger of falling on the hard snow surface.

Some snow will fall in some localities. The fresh and somewhat older wind slabs are mostly small and can only be released in isolated cases. In some cases relatively hard layers of snow are lying on old snow containing large grains. This applies especially on shady slopes at high altitudes and in high Alpine regions. The snowpack will be subject to considerable local variations.