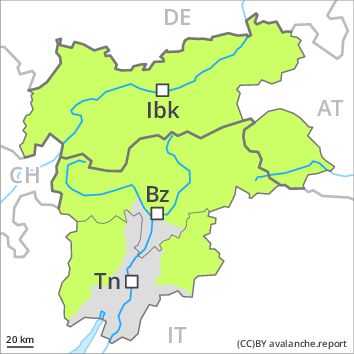 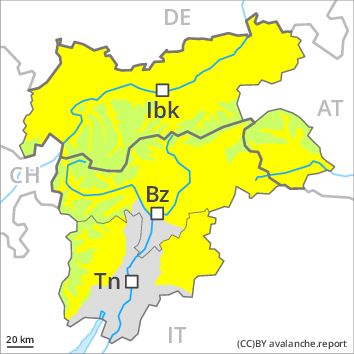 The danger of wet and gliding avalanches will increase quickly during the day.

The Avalanche Warning Service currently has only a small amount of information that has been collected in the field.
Wet and gliding avalanches are the main danger. The avalanche prone locations are to be found in particular on steep northeast to south to northwest facing slopes below approximately 3000 m and on steep north facing slopes below approximately 2400 m. Wet avalanches can release the saturated snowpack and can reach as far as areas without any snow cover. From starting zones where no previous releases have taken place avalanches can in isolated cases reach large size.
In addition a low (level 1) danger of dry slab avalanches exists. This applies in particular on extremely steep shady slopes above approximately 2500 m. The avalanches are rather small and can mostly only be released by large loads.

Outgoing longwave radiation during the night will be quite good. The surface of the snowpack will freeze to form a strong crust only at high altitudes and will already soften in the late morning. Individual weak layers exist deep in the old snowpack on shady slopes, especially above approximately 2400 m in areas where the snow cover is rather shallow. At low altitude no snow is lying.

Increase in avalanche danger as a consequence of warming during the day and solar radiation.