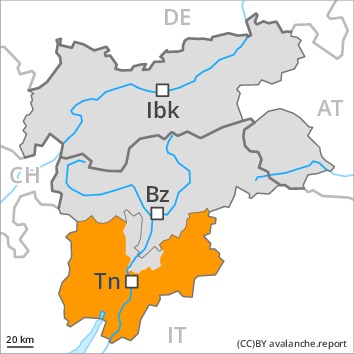 Considerable avalanche danger will still be encountered. As the snowfall becomes more intense the avalanche prone locations will become more prevalent as the day progresses.

Over a wide area 15 to 30 cm of snow, and even more in some localities, will fall from early morning above approximately 1500 m. The new snow and wind slabs remain very prone to triggering in all aspects above the tree line. This applies in particular on very steep slopes, and adjacent to ridgelines. Dry avalanches can be released by small loads or triggered naturally.
In addition a latent danger of gliding avalanches and moist snow slides exists. Until the temperature falls more medium-sized moist slab avalanches are possible. They can also penetrate deep layers and reach quite a large size, caution is to be exercised, including on cut and grassy slopes.
Extensive experience in the assessment of avalanche danger is required. Areas with glide cracks are to be avoided as far as possible.

As a consequence of new snow and a moderate to strong southwesterly wind, easily released wind slabs will form especially adjacent to ridgelines. This also applies in gullies and bowls above the tree line. Over a wide area new snow and wind slabs are lying on the smooth surface of an old snowpack, especially above approximately 1900 m.
The old snowpack is moist, in particular in the south, as well as in the other regions in particular at low and intermediate altitudes. Faceted weak layers exist in the centre of the snowpack.

Slight decrease in danger of dry avalanches as a consequence of the ceasing of precipitation. Until the temperature falls at any time small and medium-sized moist and wet avalanches are possible. This applies in particular below approximately 2000 m, as well as on very steep sunny slopes. 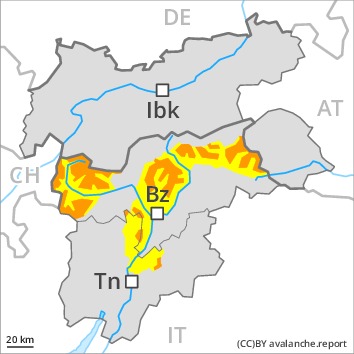 Backcountry touring calls for experience in the assessment of avalanche danger.

High altitudes and the high Alpine regions: On wind-loaded slopes dry slab avalanches are possible, even large ones in isolated cases. The number and size of avalanche prone locations will increase with altitude.
The fresh snow and in particular the sometimes deep wind slabs can be released easily, or, in isolated cases naturally in all aspects. Avalanches can also penetrate deep layers and reach dangerously large size. Weak layers in the upper part of the snowpack can still be released in some places by individual winter sport participants in particular in areas where the snow cover is rather shallow. Low and intermediate altitudes: A latent danger of gliding avalanches exists. Areas with glide cracks are to be avoided as far as possible.

10 to 20 cm of snow will fall until Thursday above approximately 1000 m. The fresh wind slabs are lying on soft layers in all aspects above the tree line. As a consequence of snowfall the occasionally strong southerly wind, the snow drift accumulations will increase in size.
The snowpack is moist, in particular at low and intermediate altitudes.
Avalanche prone weak layers exist in the centre of the snowpack in all aspects, in particular above approximately 2000 m.