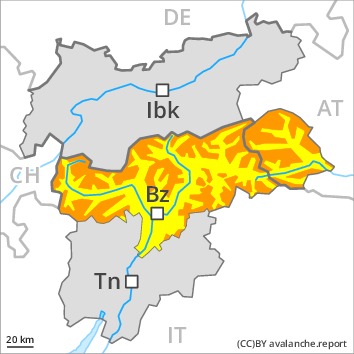 Wind slabs in the high Alpine regions. Gliding snow is to be evaluated with care and prudence.

The fresh wind slabs can be released easily. or in isolated cases naturally, in all aspects above approximately 2000 m. The number and size of avalanche prone locations will increase with altitude. Avalanches can also penetrate deep layers and reach dangerously large size. Weak layers in the old snowpack can still be released in some places by individual winter sport participants in particular in areas where the snow cover is rather shallow.
A latent danger of gliding avalanches exists. Areas with glide cracks are to be avoided as far as possible.

The fresh wind slabs are lying on soft layers in all aspects above the tree line. The various wind slabs have bonded poorly together.
Towards its base, the snowpack is moist and its surface has a melt-freeze crust, in particular at low and intermediate altitudes.
Avalanche prone weak layers exist in the centre of the snowpack in all aspects, in particular above approximately 2000 m.

As a consequence of low temperatures and the occasionally strong wind, the snowpack can not consolidate during the next few days. Fresh wind slabs require caution. In addition a latent danger of gliding avalanches exists.