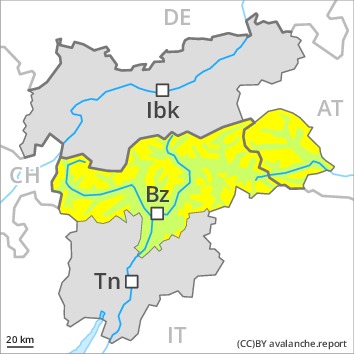 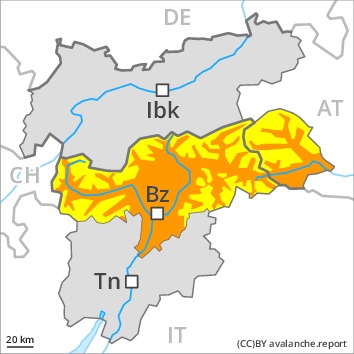 A clear night will be followed in the early morning by quite favourable conditions. As the day progresses as a consequence of warming during the day and solar radiation there will be an appreciable increase in the danger of wet and gliding avalanches, caution is to be exercised on very steep sunny slopes below approximately 2400 m, as well as in steep rocky terrain. Wet avalanches can release the wet snowpack and reach large size. Backcountry tours should be concluded timely.

As a consequence of the strong southwesterly wind, fresh snow drift accumulations will form on Monday. The wind slabs are mostly easy to recognise and can be released by large loads in particular. The avalanche prone locations are to be found in particular on very steep shady slopes above approximately 2200 m and adjacent to ridgelines. Avalanches can additionally in very isolated cases be released in deeper layers, mostly by large additional loads in isolated cases, especially in areas where the snow cover is rather shallow. Such avalanche prone locations are very rare.

Outgoing longwave radiation during the night will be good over a wide area. The surface of the snowpack will freeze to form a strong crust and will soften earlier than the day before, in particular on steep sunny slopes below approximately 2400 m. The spring-like weather conditions as the day progresses will give rise to increasing and thorough wetting of the snowpack.
The strong wind will transport the old snow. The fresh and older wind slabs are lying on soft layers in particular on steep shady slopes above approximately 2400 m. As a consequence of mild temperatures and solar radiation the snow drift accumulations stabilised. Isolated avalanche prone weak layers exist in the centre of the snowpack on west, north and east facing slopes.

Wet avalanches as the day progresses. As a consequence of warming and solar radiation, the natural avalanche activity will increase.